The Hamites, Women In Scripture

Jezebel and 32 Signs of The Jezebel Spirit

The traditional Christian crowd sometimes make reference to “the Jezebel spirit”, but what is it and why? The name Jezebel is mentioned 22 times in scripture (21 in the OT and 1 in the NT), but the teaching of “the Jezebel spirit” is based on the 1 mention in the New Testament. If you believe in the Jezebel spirit or know someone that does, you’re going to want to read this entire study. If you find something worth sharing, please do so.

Jezebel In The Old Testament

The story of old Testament Jezebel can be found across 1 Kings and 2 Kings. When Ahab began to reign, he took a wife named Jezebel (1 Kings 16:31), the daughter of Ethbaal king of the Zidonians. A quick summary of Jezebel’s lineage breaks down as follows:

Jezebel’s marriage to Ahab was just one of many interracial marriages between the line of Ham and the line of Shem. Not long after her marriage, she began to kill the prophets. During this time Obadiah the prophet helped hide 100 other prophets escape from her (1 Kings 18:4).

Because of what Jezebel had done in Israel, God promised that three things would happen to her.

When it came time for Jezebel to die, her death was actually a lot more violent than just being eaten by dogs. When Jehu arrived, he saw Jezebel in a window with her face painted (2 Kings 9:30), so he ordered her to be thrown out the window:

“And he said, Throw her down. So they threw her down: and some of her blood was sprinkled on the wall, and on the horses: and he trode her under foot. And when he was come in, he did eat and drink, and said, Go, see now this cursed woman, and bury her: for she is a king’s daughter. And they went to bury her: but they found no more of her than the skull, and the feet, and the palms of her hands.” – 2 Kings 9:33-35

Not only was Jezebel thrown out of a window, but upon hitting the ground her blood splattered on the wall and on the horses. She was then trampled by the horses. If the fall didn’t kill her, being trampled by horses certainly would’ve finished the job. We aren’t told how much time it took Jehu to eat before giving the order to have Jezebel buried, but by the time the men go to bury her, only her head, hands, and feet were left. It doesn’t seem logical that “dogs” would devour a human corpse in such a manner, but these may not have been dogs in the modern sense of the word. 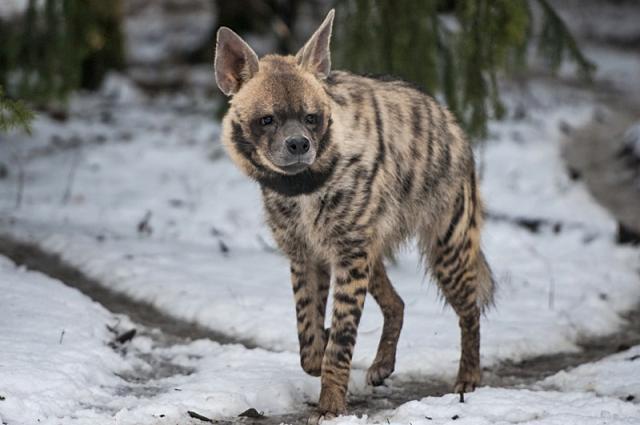 The Striped Hyena is native to North and East Africa, which traditionally included Israel. Because Israel and Egypt share a border, it is not uncommon for Striped Hyenas to be found in Israel. Hyenas are also known to devour corpses, including the bones. A few hyenas could eat an entire corpse of a human in less than an hour. This seems to be the most reasonable explanation of the type of dogs that ate Jezebel.

Jezebel In The New Testament

In the New Testament we find that a different Jezebel is alive and present, and just as destructive to the church.

“Notwithstanding I have a few things against thee, because thou sufferest that woman Jezebel, which calleth herself a prophetess, to teach and to seduce my servants to commit fornication, and to eat things sacrificed unto idols.” – Revelation 2:20

Unlike the Jezebel in the Old Testament that hated the prophets and had them killed, this new Jezebel posed as a prophetess and taught false doctrine within the church. This false doctrine included idolotry and ritual sex.

In similar manner to the first Jezebel, this Jezebel is also pronounced a punishment by God.

“And I gave her space to repent of her fornication; and she repented not. Behold, I will cast her into a bed, and them that commit adultery with her into great  tribulation, except they repent of their deeds. And I will kill her children with death; and all the churches shall know that I am he which searcheth the reins and hearts: and I will give unto every one of you according to your works.” – Revelation 2:21-23

In these verses the crime of adultery is named, which probably happened during fornication (idolatrous sex rituals). The punishment for her crimes would be the following:

As we read through the list we get the sense that it’s just a list of personality traits that religious people don’t like. The three bold and red items above stood out to me the most as I compiled this list.

The truth is that the vast majority of everything we’ve ever heard about the Jezebel spirit is a lie. It’s completely fabricated church mythology created as a means of control. Nobody wants to be accused of having the Jezebel spirit in church. It immediately makes people act accordingly.

Operating In The Spirit of Jezebel

There are some that believe that the phrase “the Jezebel spirit” actually refers to someone operating in like manner to Jezebel. If we stick true to the Bible’s words concerning the false prophetess Jezebel, then ONLY the following attributes could be referred to as someone operating in the spirit of Jezebel:

These are the only five attributes of Jezebel that are given. Anyone adding anything extra to the teaching is not being truthful, and should be recognized for the false teacher that they are IF and only IF they refuse to correct their error after it is pointed out.

Many church leaders have a bad habit of completely making up spirits of (fill in the blank) in order to explain things. This is no different than the pagan cultures naming gods of (fill in the blank). The Bible does not give us permission to make up spirits and add them into our teachings or doctrine, nor is it an innocent mistake. It is false teaching. If we can’t verify what a pastor is teaching by using the Bible, then we need to point it out. If that pastor then continues to false teach intentionally, we need to part ways with them while warning others. We as believers should not allow someone in a leadership position to infect us with their false teaching just because they have a title.