The Shemites, Women In Scripture

Miriam: The Older Sister of Moses and Israel’s First Prophetess

Miriam is only mentioned by name in 14 verses in the Bible, but she is one of the most important people found in the pages of scripture. While she is often overlooked, Miriam was the only person right by Moses’ side from birth to death.

Who Was Miriam’s Mother?

Miriam, Moses, and Aaron were all born to Jochebed while living in Egypt, Africa. We actually know less about their mother than we do about there father, and there is almost nothing said about him in the Bible.

Who Was Miriam’s Father?

While the story doesn’t mention their father Amram, it is likely he had an influence in Moses’ life as well. The Bible doesn’t give us much to go on other than a name and a tiny bit of genealogy.

How Old Was Miriam?

We’re not told how much older she was than Moses, but we know that she was old enough to comprehend the situation, be concerned for her brother, figure out a way to keep the family together, and more. What we know to be true is that Aaron was three years older than Moses, and a three year old most likely wouldn’t have thought to follow their brother down the river and then suggest that their mother nurse the baby.

Miriam was definitely older than Moses and Aaron, and likely close to her teens, if not already in her teens when she met Pharaoh’s daughter.

Miriam and The Birth of Moses

Her story begins with the decree from Pharaoh that all newborn Hebrew males should be aborted immediately. This decree was given to two Hebrew midwives that feared God more than they feared Pharaoh.

“And the king of Egypt spake to the Hebrew midwives, of which the name of the one was Shiphrah, and the name of the other Puah: And he said, When ye do the office of a midwife to the Hebrew women, and see them upon the stools; if it be a son, then ye shall kill him: but if it be a daughter, then she shall live. But the midwives feared God, and did not as the king of Egypt commanded them, but saved the men children alive” – Exodus 1:15-17

Now an older sister to a new baby brother, we can only imagine how she must have felt knowing that that he might be killed.

When the mother of Moses couldn’t hide him anymore, it was Miriam that stayed by his side until he was rescued by Pharaoh’s daughter.

“Then said his sister to Pharaoh’s daughter, Shall I go and call to thee a nurse of the Hebrew women, that she may nurse the child for thee? And Pharaoh’s daughter said to her, Go. And the maid went and called the child’s mother.” – Exodus 2:7-8

Seeing her brother was going to survive, she was quick on her feet and suggested that their mother Jochebed (Numbers 26:59) raise the child for the princess. Her quick thinking insured that their entire family remained together. It was likely due to the fact that Moses was raised by his biological mother that he decided to kill the Egyptian in defense of his Hebrew brothers.

Even though it was Miriam who was in a position to keep her family together, her name isn’t given until further in Exodus, when she’s seen singing and dancing in celebration of Israel’s freedom.

“And Miriam the prophetess, the sister of Aaron, took a timbrel in her hand; and all the women went out after her with timbrels and with dances. And Miriam answered them, Sing ye to the LORD, for he hath triumphed gloriously; the horse and his rider hath he thrown into the sea.” – Exodus 15:21

Not only is this the first mention of Miriam’s name, but it is the first time we’re introduced to the concept of a prophetess. Miriam is the first of six prophetesses mentioned in the Bible:

In addition to these six, there is a final seventh named as a false prophetess in the book of Revelation:

In Old Testament times prophets served as the messengers of God and as the leaders of his people. We see Miriam’s role as leader develop throughout the story of the Exodus, but it isn’t until the book of Micah that we receive confirmation that she was indeed one of the first three leaders of the nation of Israel.

The First Woman To Lead Israel

“For I brought thee up out of the land of Egypt, and redeemed thee out of the house of servants; and I sent before thee Moses, Aaron, and Miriam.” – Micah 6:4

Miriam Given Leprosy and Turned White As Snow

There are many people that attempt to use this verse to make the claim that God is against interracial marriage. Unfortunately, those people stop short of reading the entire story or simply disregard the rest of the story in order to support their own personal beliefs, just like Miriam.

One possible interpretation of this verse is that Miriam and Aaron intended to pass off their own personal opinion as the word of the Lord in order to chastise Moses for his marriage to his second wife. The text also seems to indicate that they didn’t think Moses was any more special than they were, but the Lord heard it.

“And he said, Hear now my words: If there be a prophet among you, I the LORD will make myself known unto him in a vision, and will speak unto him in a dream. My servant Moses is not so, who is faithful in all mine house. With him will I speak mouth to mouth, even apparently, and not in dark speeches; and the similitude of the LORD shall he behold: wherefore then were ye not afraid to speak against my servant Moses?” – Numbers 12:6-8

The Lord makes it clear that he is capable of speaking for himself when and if he had a problem with Moses’ decision to marry an Ethiopian woman. God didn’t have a problem with it, and by Miriam attempting to pass off her personal prejudice as if it was the word of God, she became the focus of his anger:

“And the anger of the LORD was kindled against them; and he departed. And the cloud departed from off the tabernacle; and, behold, Miriam became leprous, white as snow: and Aaron looked upon Miriam, and, behold, she was leprous.” – Numbers 12:9-10

Our understanding of leprosy is largely skewed because of tradition. The Bible actually describes three different skin conditions with the same word:

Based on the text, it would seem that God turned her into an albino since she “became leprous, white as snow”. Her entire body was turned white, which rules out vitiligo and the skin disease. The reason this is such a big deal is because Miriam had the same skin color as an Egyptian. We know her skin was black because she was the sister of Moses and Moses was mistaken for an Egyptian by the Midianite girls (Exodus 2:19).

After seeing Miriam turned from the same color as Egyptians to snow white, Moses and Aaron immediately pray for her to be restored (Numbers 12:11-13).

What bothers many people about these verses is that God stripped Miriam of her melanin as a punishment. Many adherents to Eurocentric Christianity often teach that black skin was a punishment from God served out on both Cain and Ham. Neither of those things actually occur in scripture, but the changing of Miriam is a clear use of white skin as a punishment. Not only is it used as a punishment, but God likens it to her father spitting in her face. What was done to Miriam is so important that God tells the Hebrews to remember this specifically.

“Remember what the LORD thy God did unto Miriam by the way, after that ye were come forth out of Egypt.” – Deuteronomy 24:9

After being shut out of the camp for a week, Israel waited for Miriam to be restored before continuing their journey (Numbers 12:15).

How Did Miriam Die?

How did Miriam die? That’s a question that shall remained unanswered, but it was likely due to old age. Not much is said about Miriam after her encounter with God, but we are told when and where she died. While the Bible doesn’t tell us how old she was, we know that Moses was nearing or over 100, and she was his older sister.

“Then came the children of Israel, even the whole congregation, into the desert of Zin in the first month: and the people abode in Kadesh; and Miriam died there, and was buried there.” – Numbers 20:1

Miriam was buried on the Sinai Peninsula in the Wilderness of Zin. The following map shows the area of Africa the Hebrews were in when Miriam died. 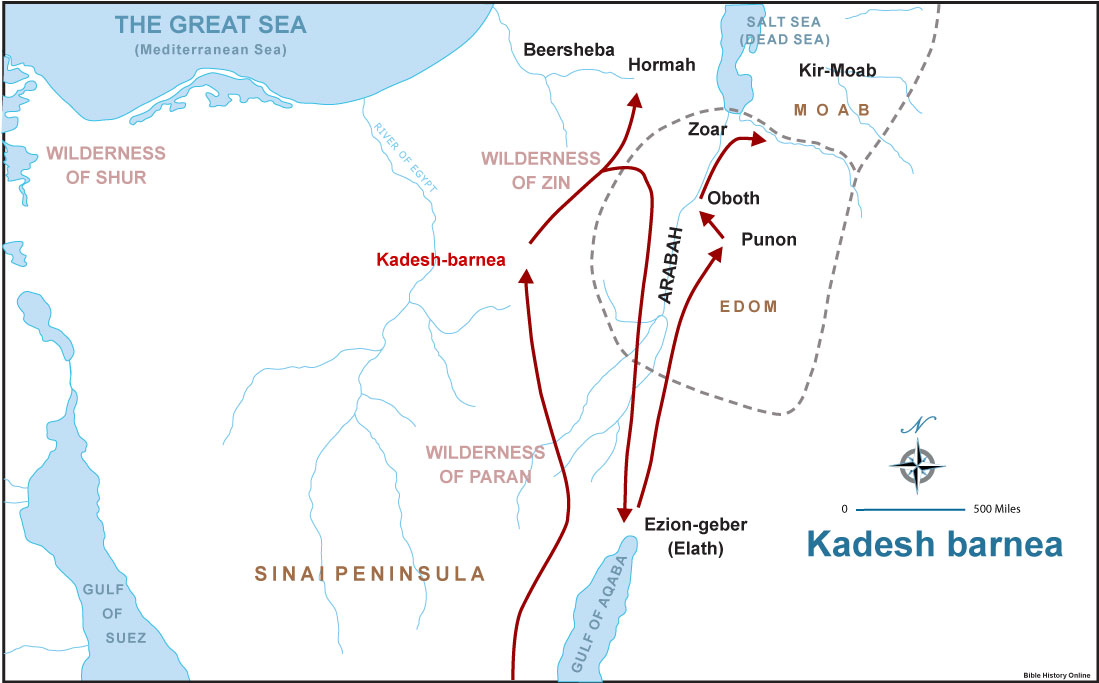 Suggested Reading – The Family of Miriam